Want to visualize part of your IT infrastructure in a hierarchical way? Do you know the Business Impact of single services? What would happen in case you power down a specific server? Would it have any influence on your most important services? If yes, which applications would have been affected? This is what the Icinga Business Process module has been built for.

Define as many processes nested as deep as you want: each node can calculate it’s own state based on a given logical operator. Show them as a tree or using the tile renderer. Discover the business impact of your components, simulate state changes and deploy Icinga Service Checks and Notifications. Start to monitor whole processes instead of single services.

Today we’re releasing Docker 1.13 with lots of new features, improvements and fixes to help Docker users with New Year’s resolutions to build more and better container apps. Docker 1.13 builds on and improves Docker swarm mode introduced in Docker 1.12 and has lots of other fixes. Read on for Docker 1.13 highlights.

Klaus
Wed, 21 Dec 2016 10:39:11 +0100
The new forms framework makes a great impression. Not so sure about the new RTE (CKEditor). No question the old one (htmlArea) was a beast and terrible to configure, but when you once had a right configuration, it was very powerful. We will see how much effort it will be to customize the new editor.

Christmas came early this year - TYPO3 v8.5 has been released just now, including some very exciting and promising changes. This so-called sprint release is one further step towards TYPO3 8 LTS, scheduled to be published in April 2017.

Just 4 months have gone by since 1.1.0, and slightly more then 7 months since our first stable release. Icinga Director matured fast and has grown from a small Icinga Web 2 module to a pretty huge project. Yesterday we released version 1.2.0, packed with new features, bug fixes and usability improvements.

After almost a year of substantial effort, including 5 Alphas, 1 Beta, and 1 Release Candidate we are pleased to announce Elastic Stack 5.0.0 GA

We are very pleased to announce the release of Selenium 3.0. If you’ve been waiting for a stable release since 2.53.1, now’s your chance to update. And if you do, here is what you’ll find:

As we’ve said before, for users of the WebDriver APIs this is a drop-in replacement. You’ll find that modern browsers, such as Chrome and Edge will continue to work just as before, and we’ve taken the opportunity to fix some bugs and improve stability. Selenium Grid users may require updates to their configuration as the json config file format has been updated, as have some of command line parameter options, but the upgrade should also be smooth.

The major change in Selenium 3.0 is we’re removing the original Selenium Core implementation and replacing it with one backed by WebDriver. This will affect all users of the Selenium RC APIs. For more information, please see the previous post.

#^Plasma 5.8
by The KDE Community on YouTube
Release  KDE

Today we are officially publishing the first stable release of KDE Connect. Hooray! This version is the most solid yet feature-packed version we ever released. It’s been in development for a year now and it took a lot of hard work, we hope you like it! 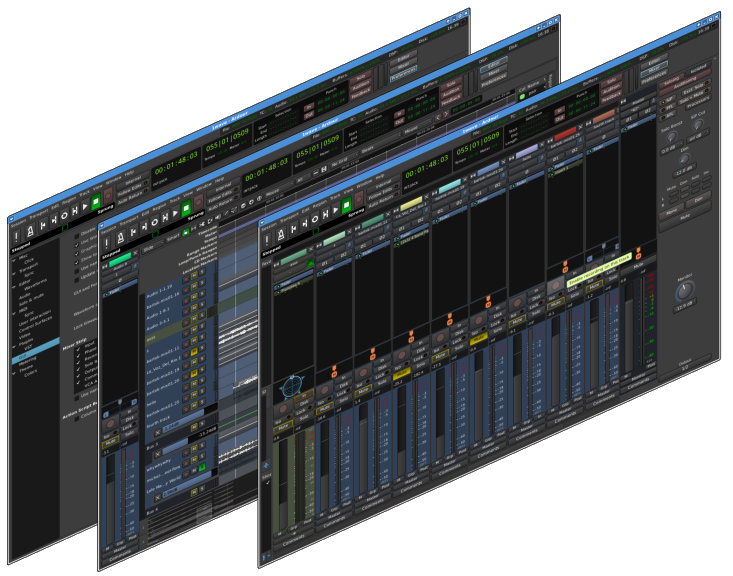 Ardour 5.0 is now available for Linux, OS X and Windows. This is a major release focused on substantial changes to the GUI and major new features related to mixing, plugin use, tempo maps, scripting and more. As usual, there are also hundreds of bug fixes. Ardour 5.0 can be parallel-installed with older versions of the program, and does not u...

Yes, it is that time again (finally)!  Following a long period of
planning, development, and testing, the Slackware Linux Project is proud
to announce the latest stable release of the longest running distribution
of the Linux operating system, Slackware version 14.2!

We are sure you'll enjoy the many improvements.  We've done our best
to bring the latest technology to Slackware while still maintaining the
stability and security that you have come to expect.  Slackware is well
known for its simplicity and the fact that we try to bring software to
you in the condition that the authors intended.

In this release we have focused on fixing a few regressions reported in the last major release Piwik 2.14.0, as well as 27 other small improvements. As always we – the Piwik team – are very interested to hear your feedback! 27 tickets have been closed by 6 contributors. This release does not contain any major database upgrade. Piwik is an open ...

#8331 Do not perform an inner join when looking for archives to purge, it does not scale.
#7181 Report archives have tripled in size since update to 2.10

This is a cursory overview over the most important changes in Scribus compared to the latest stable version 1.4.x. Please note that the file format has changed and is not backwardly compatible with any prior stable version (1.4.x or earlier). To be precise, you will not be able to open 1.5.x files with version 1.4.x or any earlier version. Also not...

2015-02-28 PuTTY 0.64 released, fixing a SECURITY HOLE
PuTTY 0.64, released today, fixes a security hole in 0.63 and before: private-key-not-wiped-2. Also diffie-hellman-range-check has been argued to be a security hole. In addition to these and other less critical bug fixes, 0.64 also supports the major new feature of sharing an SSH connection between multiple instances of PuTTY and its tools, and a command-line and config option to specify the expected host key(s).

Release  SysAdmin
newer | older
This website is tracked using the Piwik analytics tool. If you do not want that your visits are logged this way you can set a cookie to prevent Piwik from tracking further visits of the site (opt-out).